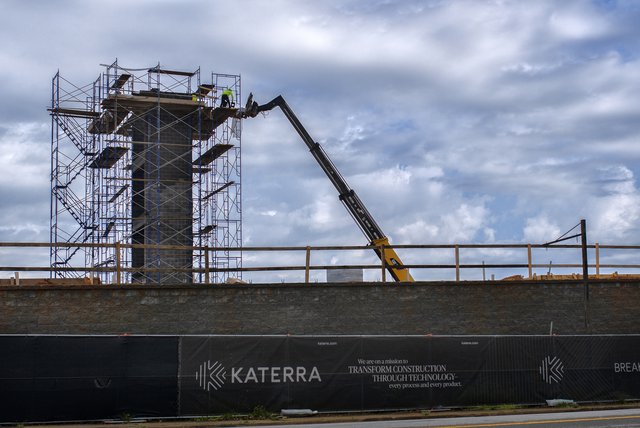 The third downtown project is a $ 50 million redevelopment project on the old Regions Bank block that will enable the construction of a seven-story Courtyard by Marriott hotel with 130 units called The National.
Ligon said the project, a four-building project of 107 apartment buildings, has a landmark deadline for mid-2021 and will be completed by December 2022.
The original plan was to convert the former site of the 1st National Bank of Gainesville into a 50-room hotel with space for meeting rooms and one-bedroom suites. “

It is currently planned to move the hotel next to the bank. Four floors of rental space for doctoral students and young professionals who want to live in the city center will be set up above the lobby on the bank’s ground floor.

The lobby on the bank’s ground floor will be converted into a flexible meeting room that can be divided into two separate rooms or a larger meeting room for almost 200 people.
The third building will have a five-story apartment with 50 luxury apartments and a two-story parking deck. Residences at The National will include 10 units per floor with five one-bedroom apartments and 45 two-bedroom apartments
The National’s development plan includes a 30,000-square-foot building designed for high-tech conference space, business meetings, and a private dining club on the corner of Washington and Green Streets.
“It’s a great and busy time for development in downtown Gainesville and it’s exciting to see what our downtown area will be like in 2022,” said Ligon. “At the center of these developments is not only the addition of retail space, but also the high availability of living space.”

Plus parking and street design

The city is also working on two of its own projects in 2021: road design and a new parking deck.

A road construction project is ongoing next to the streets of Washington, Bradford and Spring. This project included moving overhead lines to Green Street, work on sewers, storm sewers and sidewalks along Green Street between Spring and Washington Streets, and Washington Street between EE Butler Parkway and Green Street, with the earliest completion date being mid-2021 was established. if the weather permits it.
“We value the patience of both our pedestrians and our drivers as we make the roads so open and safe for travel,” he said. “When all of this is done, it will be of great benefit to people traveling downtown.”
The second city project involves the addition of a seven-story parking deck for 400 cars by the Hall County Public Library.
In December, Gainesville City Council approved an agreement with Hall County to build and co-fund the project.
Ligon said the demolition of the former site of the Turner, Wood and Smith building at 100 Brenau Ave. it’s planned.

Are “Pay When Paid” Provisions Unenforceable beneath the SOPA Even for Terminated Contracts?