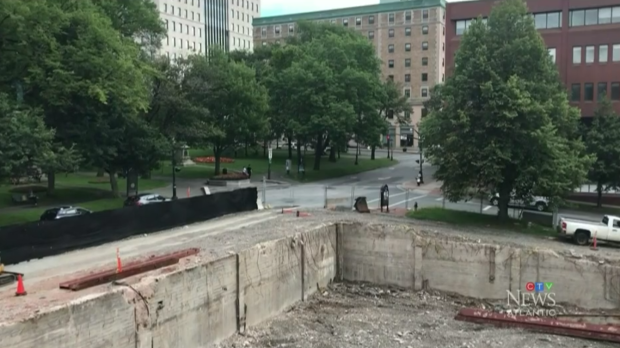 SAINT JOHN, NB – The site of the former Woolworth’s department store in Uptown Saint John has been cleared and the property is now a clean slate, ready for construction, which the contractor says could start soon.

The planned development for the so-called 91 King Street received the provisional approval stamp of the Common Council after a public hearing on Monday evening.

“We had unanimous support for the project, which gives us the green light to further develop our design plans for the construction of a 12- to 14-story apartment building,” says property owner and developer Percy Wilbur.

The demolition of the derelict building on the corner of King and Charlotte Streets began in early June this year after it had stood empty for many years and suffered major water damage.

“I can barely remember a day this was a busy corner, it was boarded up for so long,” said Donna Reardon, mayor of Saint John. “It’s just not good for the face of the city so I think everyone wanted to see something happen to this corner.”

The plans for the development, which have not yet been completed, include underground parking, retail and office space as well as more than 90 residential units.

The next step for the project, says Wilbur, is to get the infrastructure into the ground.

“This is what we will concentrate on over the next few months until spring,” says Wilbur. “To bring the infrastructure and the courage of the building in place so that we can pour the foundations, the foundation and build it up.”

Construction on the project is expected to take about two years, and the Mayor believes it will benefit other businesses in the King’s Square area.

“Imagine this influx into the square is huge – and then the domino effect of 90 units and how that enlivens your space up there and how the shops, etc. benefit from it,” says Reardon.

An iconic piece of Saint John’s history that officials hope will be a huge part of the city’s future too.

PSOE denounces the associated fee overruns and delay within the development of the Orihuela...

Thoughts the Hole: Development initiatives and other people