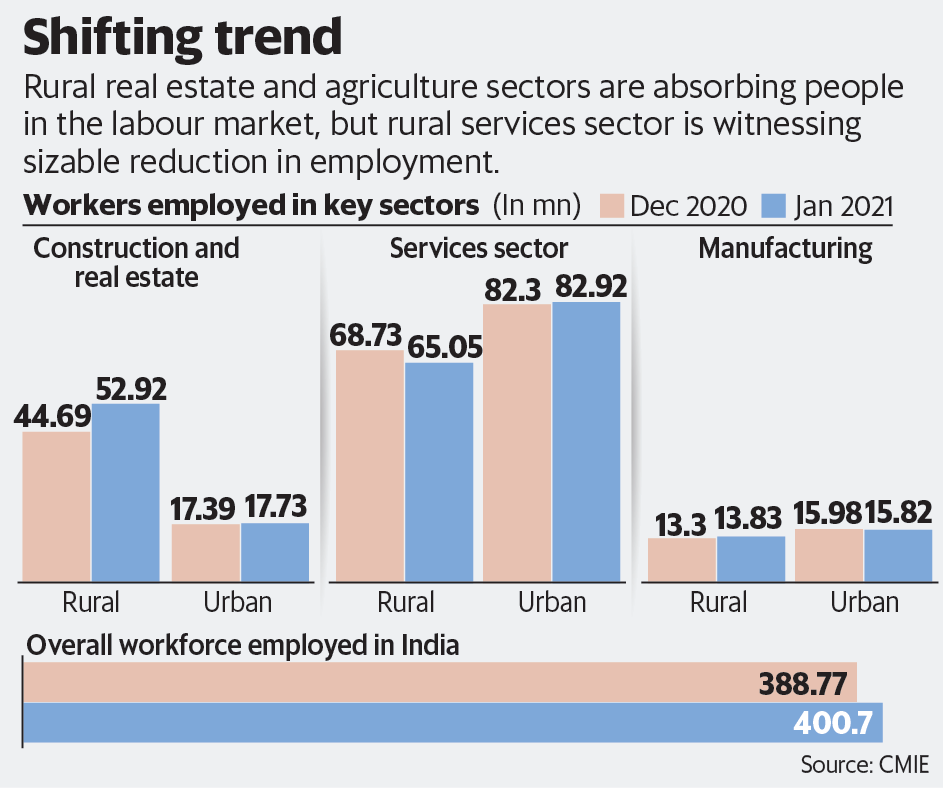 The increasing construction activity in rural areas is leading to a recovery in the Indian labor market instead of cities, service sectors and industrial belts.

Of the nearly 12 million new arrivals in January, most are helping rural India build homes and roads. The construction and real estate sectors in rural India added more than 8.23 ​​million workers in January, data from the Center for Monitoring the Indian Economy (CMIE) showed. In comparison, the labor-intensive construction sector in urban India added fewer than 350,000 people.

Rural real estate and agriculture sectors are absorbing people into the labor market, but the rural services sector has seen a significant decline in employment

Agriculture consumed 4.26 million people, while manufacturing and mining saw negligible growth. It does so amid an ongoing struggle in the service sector, which saw employment fall by more than 3 million in January compared to December.

Economists and experts say the employment data highlights two main trends. First, in rural India, which has been less affected by the pandemic, more people who have returned from the cities are shifting to agriculture, real estate and the construction sector. Second, informal employment is catching up in these sectors, but a subdued recovery in organized sectors and informal services is hurting India’s job recovery.

According to Anuj Puri, chairman of Anarock, a real estate consultancy and advisory firm, there is a robust recovery in residential construction, which is attracting a mix of pent-up and new end-users. The “effects of coronavirus lockdowns were not as severe in Tier 2 and Tier 3 cities as they were in the larger cities,” and these smaller cities are more of theirs along with government jobs that have not had high job losses dependent on local economy.

“In short, the above factors have a multiplier effect in these sectors and promote job creation,” said Puri.

The Knight Frank-Ficci-Naredco Real Estate Sentiment Index survey, published Jan. 27, found that the real estate sector will grow faster over the next six months and that “sentiment” is much higher in East, South and West Indies (score of 65) to 66) opposite North India.

The revitalization of real estate and construction activity in the rural sector is due to the increased construction of individual buildings, renovation of existing houses and structures and the construction of rural roads, said Arup Mitra, professor of economics at the Institute for Economic Growth of Delhi University.

“There is a pent up demand for rural property that has been sustained for several months due to the lockdown. With more people at home due to reverse migration and limited job opportunities in cities and industrial belts, people are engaging in two sectors, in their own businesses and in real estate and construction work with small tickets. However, the growth in employment in real estate and agriculture suggests informalization is on the rise, “said KR Shyam Sundar, labor economist and professor at XLRI Jamshedpur.

“The winter vegetable harvest, the cultivation of legumes and oilseeds absorb the rural workforce and this is visible in CMIE data. However, the rural service economy is in poor shape with too many people working in limited sectors. Both productivity and income have fallen for a large group of people, which has a negative impact on the service sectors there. I believe there is massive job loss in rural services due to lack of demand and little recovery in urban services in urban India, “Mitra said.

* * Thank you for subscribing to our newsletter.