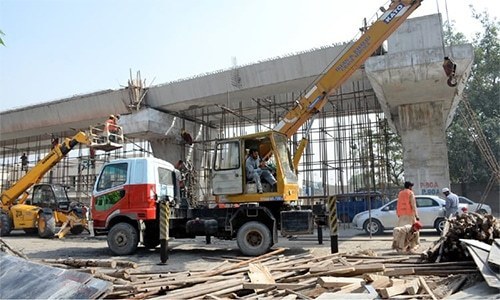 “Rs 353.43 billion investment in construction projects in Punjab would generate Rs 1,777.15 billion in economic activity and create 315,678 employment opportunities,” an official said at a meeting chaired by the Prime Minister on Housing and Construction.

Mr. Khan was informed about the promotion of construction activities in the country and the fast approval process by the provincial governments.

Punjab chief secretary Jawwad Rafiq told the meeting that building applications have been made on an area of ​​87.03 million square feet in the province, including Lahore (38 percent) and Metropolitan Corporation (22 percent), Rawalpindi (18 percent), Faisalabad (Nov. Percent) and Multan (11 percent) 10pc), had been received so far.

Imran Says The Digitization of Land Register Needs is the Hour; Orders the placement of housing association data on development agency websites

The meeting was informed that with the approval of the 41.07 square meter construction, construction would continue in all areas of Punjab. The Secretary General said that 11,349 of the 17,692 construction applications received on the portal had been approved.

The meeting was told that the applications received so far to build 10,854 square feet in Khyber Pakhtunkhwa would generate Rs 190 billion worth of economic activity in the province.

The General Secretary of Sindh informed the meeting that a total of 22 construction projects had been approved in the province.

The Prime Minister instructed the Secretary General to speed up the approval process in order to stimulate construction activity and the resulting economic dynamism in Sindh.

The Prime Minister was also briefed by the Survey General of Pakistan (SGP) about the digitization of land registry entries in various provinces. The meeting was informed that the SWP had been provided with data on state territory in all 36 districts of Punjab, including data on masawis ​​(village maps). Tax data on 730,000 properties in Lahore, including that of Auqaf (Trust), was also provided.

The KP chief secretary informed the meeting that the SWP had been provided with data on state areas in all districts of the province.

The Prime Minister has been informed by the SWP that the Sindh government has not yet provided such data. When asked by the Prime Minister, the Sindh chief secretary said the matter had been brought to the provincial cabinet and the data would be made available once it was approved.

The Prime Minister said the digitization of land registry entries, including state land, was the order of the day. He said the failure to provide data would reinforce the general impression that the illegal occupation of state land and the qabza mafia (land grabber) were supported by influential figures and that it was therefore very important to dispel that impression.

The Prime Minister instructed the SWP to make all data of the state land available for digitization of the land register. He said the placement of data from all approved and unapproved housing associations on the websites of the affected development agencies should be ensured. In addition, a central database should be set up at the provincial level so that people, especially overseas Pakistanis, can be informed of the details of such projects.