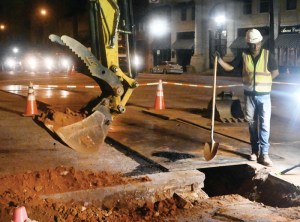 Despite the concerns of city council members over the past week, the additional construction noise that will stretch for several weeks before the Main and Innes streets are re-paved does not appear to be a major inconvenience for residents and traders, a necessary step for progress.

Following the approval of the contract by councilors last week, Charlotte-based STS Cable Services began construction Monday evening along the Main and Innes roads in preparation for a September visit by the North Carolina Department of Transportation to re-pave the roads asphalt. Construction work will take place every night, except Sundays, from 8 p.m. to 6 a.m. to avoid heavy daytime traffic and minimize the impact on downtown businesses. It involves digging trenches near various intersections to install 2-inch lines that will accommodate changes to traffic signals in the downtown area.

Young, who renovated and currently lives in the historic OO Rufty building on the 100 block on East Innes Street, said someone can expect this kind of “city noise” if they want to live downtown. So far, he has not heard any complaints from tenants.

“Construction noise is just city noise,” says Young. “It is a short-term inconvenience for long-term good.”

Construction is in preparation for the first phase of the downtown Main Street plan approved by city council members in March. After the new asphalt, the number of lanes will be reduced from four to three. A center lane for left turns onto Innes Street from Main Street will be installed. In addition, the plan changes parking from the current shallow 30-degree angle to 45 degrees, the same angle planned for the North Church Street side of Bell Tower Green Park. Each block would have a yellow arrow for left turns. Protected left turns in the shape of green arrows would be used on the square to maximize pedestrian safety.

Charlotte-based STS Cable Services crews work in the Square Wednesday night as construction begins in preparation for the repositioning and restoration of Main Street. Photo by Andy Mooney, Salisbury Post.

In addition, construction near the 200 block of West Fisher Street is expected to continue through September 10, when Bell Tower Green Park is scheduled to officially open to the public.

Kristen Trexler, who also lives on East Innes Street near the Square, told the Post that she had “heard nothing but the normal nightlife in downtown Salisbury”.

She added that she was okay with construction going on during the night as local traders have already been hit so badly by the pandemic. Like Young, she believes the construction is for the common good.

“I have a few fans that I can put on when it gets too loud,” said Trexler. “Anyone who moves to the city center must expect that it will not be as quiet as in the country. It’s the future and I look forward to everything we have to offer new residents. I leave it to the pros to figure out what’s best for downtown. I have full confidence that they will do what is best for the dealers, local residents and everyone involved. “

Wendy Alexander-Persse, who recently opened The French Nest at 119 South Main St. and lives on the 100 block on North Main Street, said it was a bit awkward but not unbearable. And it’s also something the city needs.

“The night is the only time you can do it,” she said. “You can’t make progress without a little inconvenience. We really need it. And the city deserves it. “

Mikey Wetzel, owner of Go Burrito, which is open until 11 p.m., said the construction hadn’t caused problems for his business yet. Even if he did, he “wouldn’t make a big deal of it” because he advocates progress.

“I’m 100% looking forward to (the Downtown Main Street Plan) and the park,” said Wetzel. “The construction is worthwhile in the long run.”

Like Wetzel, Cheryl Goins, owner of Pottery 101 on South Main, said the construction will have no impact on her business or the customers who visit the gallery. And as a resident of the city center, she continues to sleep “soundly through the night”.

“Even if it bothered me, I’m happy to be on the right track with our Main Street,” she added.

The work must be completed by September 1st as directed by NCDOT, which plans to re-cut the road after the Cheerwine Festival scheduled for September 18th. Construction work for the DOT work is expected to take five weeks, weather permitting.

Inexperienced Line LRT development delayed till at the least 2022