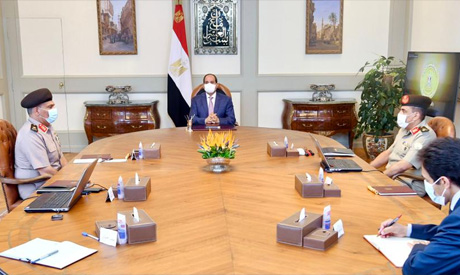 On Saturday, President Abdel-Fattah El-Sisi discussed the latest developments in the projects carried out by the Armed Forces Agency (AFEA), especially in the new administrative capital.

During the meeting, El-Sisi reviewed progress at the State Strategic Command Center Complex in the new capital.

He ordered the construction of the headquarters of international organizations in close collaboration with the United Nations to meet world-class engineering standards.

El-Sisi also followed progress on the agency’s integrated gas station projects, a mega-mosque to be called the Mosque in the new capital, Egypt, and the strategic master plan for an international exhibition center, read a statement from President Bassam Rady, spokesman for President Bassam Rady.

The meeting looked at the latest developments in road projects, including the Manfalout Road Axis, which stretches across the Nile to facilitate traffic flow and serve development projects and new urban communities on the east and west banks of the Nile.

El-Sisi reviewed the agency’s efforts to renovate the tombs and shrines of the descendants of Ahl Al-Bayt, “the Prophet Mohammed’s family,” including the shrines of Sayyida Nafisa, Sayyida Zainab and Al-Hussein in Cairo.

He also spoke about the progress made in the complex for handicraft businesses in Cairo’s Duweika district.

File variety of development tasks began within the March quarter

Elite Building Inc. v. Canada – Compliance with contractual discover provisions is a should

Stepnell placing pandemic and drawback contracts behind it