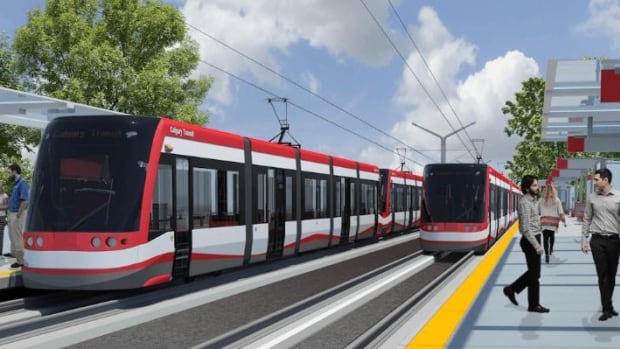 The City of Calgary has announced that construction of the Green Line LRT project will be postponed until at least 2022.

The first leg of the light rail transit line was due to begin construction this summer in the southeast section – from the Elbow River near Inglewood to Shepard Station – and create thousands of jobs.

The project is the largest in Calgary history with a potential cost of $ 5.5 billion. However, this has been delayed due to a dispute over a provincial funding agreement.

The province has raised technical concerns about the city council, which includes a tunnel in the city center. But after months of discussion, city officials say talks have resulted in no changes to the plans.

Despite the construction delay, Green Line project leader Michael Thompson said work on a major underground utility move downtown in preparation for the Green Line will begin in August – which will cost $ 138 million.

Mayor Naheed Nenshi says it was a frustrating exercise.

By the end of March, all three levels of government had spent $ 620 million on staffing and planning to facilitate work and land acquisitions.

Coun. Shane Keating, chairman of the council’s Green Line committee, calls no construction this year “a project failure” and that the provincial tactics are not helping.

“What it ultimately did is leave us even further behind than we already are. We won’t see anything in the ground in ’21 and I have no idea depending on where we’re going and how the process is for that next procedure of (Request “Expires For Suggestions) if we’ll see anything in ’22. “

He adds that the city team came up with a credible plan and presented it in the best way to proceed.

“By dividing it into three stages, we managed to get from the deep south to the core and even a little way beyond that to the river, and then the third stage, which you ride across the river,” he said.

“In many ways, I still firmly believe that once the agreement is signed, the contract or plan will be 98 percent exactly the same.”

“The Green Line is critical to revitalizing our downtown area and getting the Calgarians back to work. This unnecessary delay is a complete failure for Jason Kenney and the UCP, which is putting 20,000 jobs at risk at a time when the Calgarians need them most need, “he said a press release.

The city has been working with the province since October to address the concerns raised in an advisory report.

In December, the city announced that it would halt the procurement process for the first phase of the project.

“We do not believe that it is responsible to continue the current procurement while the talks with the province continue,” it said at the time.

On October 9, Alberta Secretary of Transportation Ric McIver wrote a letter reiterating his government’s $ 1.5 billion commitment to the project, but said a review had raised concerns.

He named costs and the current design, contingent liabilities, governance structure and the “overall procurement strategy” as topics.

These concerns were based on a provincial report by Nick Hann that was not shared with the city and the council had to file a motion in December to officially request it.

The province has said it is a “train line to nowhere” because the project has been broken into phases where the details of the neighborhood have yet to be finalized – one allegation, Mayor Naheed Nenshi and Coun. Shane Keating strongly declined both.

The city created an authority to oversee the construction of the project. The members of the public announced this in January.

The board was welcomed in a statement emailed by a spokesman and attributed to McIver.

“As stated in my December 14 letter, we were aware of the board appointments and immediately started working with the city’s search company,” it says.

“I welcome the opportunity to work with the newly appointed Green Line board members to develop a functioning transit project for Calgarians.”

A spokesperson for the project said the delay in building the first segment will cost an estimated $ 1.5 million per month.

PIL in opposition to Central Vista building one other try and stall venture: Centre...

Inexperienced building language ‘have to be accessible’