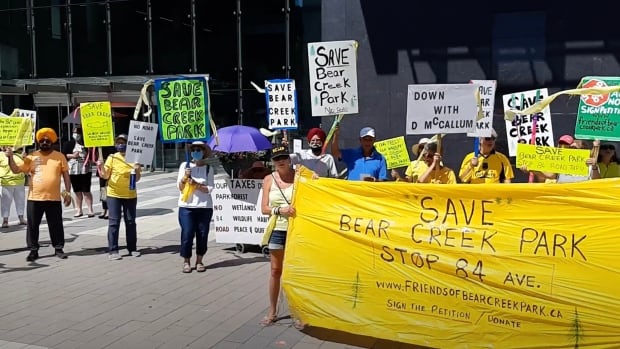 The BC Supreme Court has issued an injunction to stop the construction of a new road slated through a popular park in Surrey, BC

Surrey City’s injunction to cease construction of the road through Bear Creek Park is in effect until August 19, when the main restraining order is negotiated.

Friends of Bear Creek Park and Force of Nature filed for the injunction on Friday.

“We are confident that the court will see the wisdom of ruling in favor of the environment when the chief injunction is heard.”

Environmental groups argue that the land should only be used for parking purposes and the road should not be built without a public referendum.

Despite the restraining order, Friends of Bear Creek Park said they will continue to picket.

“We will continue to protest until this road is completely stopped and the park is safe,” said Bianca Li, a member of Friends of Bear Creek Park.

The city of Surrey previously declined to comment that the matter is now on trial.

The idea of ​​extending the street through the park has been around in Surrey for more than a decade.

In May, the council approved the street that would extend 84th Avenue from King George Boulevard to 140th Street, and earlier this week approved the construction contracts.

The project is expected to cost nearly $ 18 million in construction and park improvements, including street, bike and pedestrian walkways.

Environmental groups are concerned about the costs and the impact on the environment.