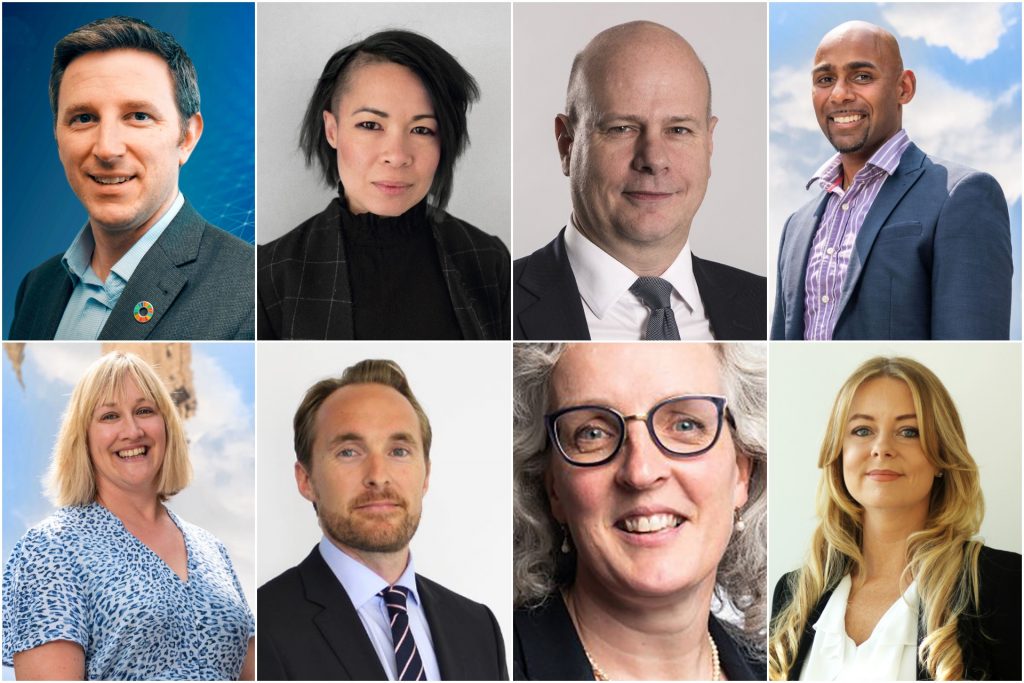 Notable appointments this month include the news that Nick Harris will lead the new-look National Highways (formerly Highways England), along with changes at the top of HS2 Ltd, Costain and Arup.

A round up of the biggest moves and appointments during August is below. To feature on next month’s appointments roundup, please email catherine.kennedy@emap.com

Highways England’s rebrand to National Highways has gone through, heralding a “new era” for strategic roads.

He will lead the organisation as it delivers the significant roads investment, and looks towards the future opportunities offered by automation and digitisation as well as delivering the government’s net-zero target.

In the role, Harris will have a particular focus on continued road safety improvements and the transformation of National Highways as a global leader in road building and maintenance, as well as delivering world class health and safety.

She will hold responsibility for HS2’s procurement, commercial and contract management including land and property-related activity.

Todd has joined HS2 Ltd after working on the UK’s Covid-19 vaccine programme, focusing on getting vaccines produced abroad into the UK. Before this, she was employed on the UK’s submarine delivery programme as a director in the Department for Business, Energy and Industrial Strategy (BEIS).

The creation of this new role reflects the importance placed by the business on working collaboratively with a range of partners to transform the customer experience of transport, helping to catalyse the green transport revolution.

Two members from Arup’s Nottingham office have been appointed as directors of the global engineering firm, representing a huge achievement for the company’s presence in the city.

Steve Fernandez and Vicky Evans are just the second and third members of the Nottingham team to have both been promoted to one of the firm’s highest positions, signifying their knowledge and expertise in their fields and future potential.

Between them, the pair have worked on major local, national and international projects, including Coal Drops Yard in King’s Cross, the St Pancras Chambers development in London, the Defence and National Rehabilitation Centre near Loughborough, and the Government’s £3.6bn Towns Fund.

Atkins has appointed Kelly Burdall as digital programme director for its transportation division, responsible for improving the way technology and data is harnessed to increase the predictability of project delivery.

Burdall joins Atkins from Connect Plus Services – the Balfour Beatty, Atkins, Egis joint venture that operates and maintains the M25 – where, as head of performance and quality, she drove business improvement with a focus on lean management and digital transformation. Prior to this, she held management roles at Atkins and Mouchel.

Buro Happold has appointed May Winfield as the new global director of commercial, legal and digital risks.

Winfield will take the lead on all commercial, legal and insurance matters for the global business, including the development of effective risk management strategies.

She has worked as a senior construction and insurance lawyer for over 16 years.

Keltbray has announced the appointment of Craig Moorfield as its new Group technical director and executive board member.

Moorfield will lead the Group’s performance in engineering, research and development and innovation. He will also take responsibility for the corresponding technical and engineering assurance across the group, providing clients and key stakeholders with confidence in the sustainability of our solutions.

He was previously head of engineering for Multiplex Europe and brings a wealth of knowledge and experience gained from working across Keltbray’s core built environment and infrastructure markets.

Hurst joins from Mott MacDonald, where he was part of the MEP leadership team and involved in healthcare projects nationally and internationally.

Douglas joins from Aecom, where he was leader of the Cambridge Building Structures team

Stubbins has over 12 years’ experience working in the retail sector both in the UK and internationally.

Dunn brings over 30 years’ experience, including eight years with London firm TP Bennett and 24 years with the global design firm CRTKL where he was promoted to director in 2007.

She joins Bam having set up her own consultancy helping clients with their social value strategies. She was involved in developing the social value programme for the Welsh Government Mutual Investment Model, delivering a £500M schools infrastructure programme across Wales. She has also worked for the Construction Industry Training Board and Bouygues.

Stantec has strengthened its community development offering with the appointment of Graham Hughes as strategy consultant for Local Authorities. Graham joins Stantec from Cambridgeshire County Council, where over the last 20 years he has successfully led a number of transformational community development projects.

In his new role as a consultant to the business, he will bring Stantec’s work closer to the needs of our local authority clients and address the challenges they face in the post-pandemic climate.

Stantec has made these new appointments in response to the expansion of work within its UK & Ireland Water business.

In their new roles Tindale and Lenihan will be responsible for overall business performance and securing new opportunities in their respective regions.

Tindale will work with Stantec’s team in the South to drive forward growth in the Midlands while Lenihan will focus on opportunities in the North, which will include delivering current and future major programmes of work with water sector clients.

Stantec has announced the appointment of Alistair Webb as director of civil engineering, Steve Bowen as technical director and Valeri Pleim as programme manager.

They join the UK Transport team and will work with John Owens, director of roads, to design and deliver major highways projects throughout the UK.

Stantec has appointed Mark Carlisle as operations director for its Ireland water business in support of its advancing growth within the sector.

Carlisle has over 27 years’ experience in the water sector across UK and Ireland.  Prior to joining Stantec, he was director of water with operational and commercial responsibility for WSP’s regulated water business in UK and Ireland.

Skanska has appointed Brad Nystrom as vice president of operations for its civil division on the West Coast.

In his new role, Nystrom will help lead civil operations and business planning in California and Washington. He will also support new, high-profile projects and business pursuits in the western US.

Justin Waguespack has also been promoted to operations vice president for its civil operations in California.

In his new role, Waguespack will lead the ongoing Regional Connector Transit Project in downtown LA, delivering the project to a successful completion for the Los Angeles County Metropolitan Transportation Authority.

Tim Balcon, former chief executive at the Institute of Environmental Management & Assessment, has been appointed chief executive of the Construction Industry Training Board (CITB).

Balcon has previously been chief executive of the Energy & Utility Sector Skills Council, non-executive director of Ofqual, the Office of Qualifications & Examinations Regulation and a member of the UK Vocational Qualifications Reform Board.

Tallon now takes on strategic responsibility for delivering highways maintenance solutions across the capital with our local authority clients and Transport for London.

He began his career as an FM Conway Highways apprentice in the London Borough of Merton, the business’ longest-standing term maintenance contract and has been instrumental in building collaborative partnerships as the term maintenance director.

He has been with the company for 16 years and will continue to head the structures team in BSP’s Nottingham office.

Dice is undergoing a period of strategic growth and has expanded its structural engineering team with a trio of new starters.

GHD has appointed David Hurren as a director within its Urban Design and Transport Planning division. Hurren will hold responsibility for continuing to grow the division, winning new contracts and developing further relationships with developers, public bodies and other stakeholders.

He joins from Robert West where he was Director of Transport Planning & Infrastructure from 2018, and has also held roles at BWB Consulting, Peter Brett Associates/DHM and Transport for London.

New head of HR and EDI appointed at McCann

National civil and electrical engineering firm McCann has continued its significant recruitment drive with the appointment of experienced HR professional Lisa Topley as the company’s new head of HR and EDI.

Topley’s appointment sits firmly within the company’s ambitions as McCann looks to continue the evolution of its HR and EDI practices to be an employer of choice within major infrastructure delivery.

She brings a wealth of experience from previous positions including 12 years with Balfour Beatty where she worked her way up from HR administrator to Operations HR consultant, as well as her most recent position as HR manager for Wabtec Faiveley.

BSP business development manager Carrie Booth will also take on an expanded role in the company, which has offices in Nottingham, Derby, Leicester and Sheffield.

Designer, manufacturer and supplier of innovative civil engineering solutions Wrekin Products has welcomed an experienced product manager to the team.

Gosia Kwapisz moves to Wrekin after a successful time as product manager at QEP. She brings a wealth of experience in aligning customer wishes and demands with innovative manufacturing possibilities.

Engineering company Forth has welcomed Chris Downham to its senior management team to lead on its wide range of innovative projects carried out by its team of engineering experts.

Downham has recently worked on completing the firm’s proof of concept of FSWBot, a world-first friction stir welding robotic crawler to carry out internal repairs and refurbishments to oil pipelines, and will concentrate on developing various other innovations which includes constructing a robot to inspect wind turbine blades.

Simon Harris will take up the role bringing with him over 20 years’ experience of delivering specialist mission critical systems and data centre consultancy across international markets. He has previously held senior roles at construction consultancy Currie & Brown and Sweett Group.

Glewis will play a critical role in supporting the key development of the local branch teams in order to enter into new markets to complement CCF’s growing insulation strategy, with a focus on ensuring customers continue to experience excellent service.

Dr Dirk Orlowsky has been elected as the new president of EAGE (European Association of Geoscientists and Engineers).

Orlowsky is currently a senior geoscientist and project manager with DMT Group.

As president, his work will focus on transforming EAGE via a five-year strategy that prioritises globalization and multi-disciplinary activities; membership and careers; creating a one-stop-shop for knowledge resource and transfer; attracting support from the broader geosciences industry; achieving recognition within the European Union; and furthering understanding and engagement from the public.

Trio of appointments at Equib

Mackenzie joins as a principal risk manager with a background in conducting detailed cost and schedule risk analysis on live mega projects. Also joining as a senior risk management consultant is Watts. He specialises in applying quantitative and qualitative analytical and risk management techniques to facilitate decision support at both a strategic and project level.

Structural steel firm John Reid & Sons has strengthened its board with a new director.

Dario Di-Felice has been promoted from head of contracts to contracts director.

Weingart Heart Affiliation Seeks To Break The Cycle Of Homelessness In Los Angeles With...