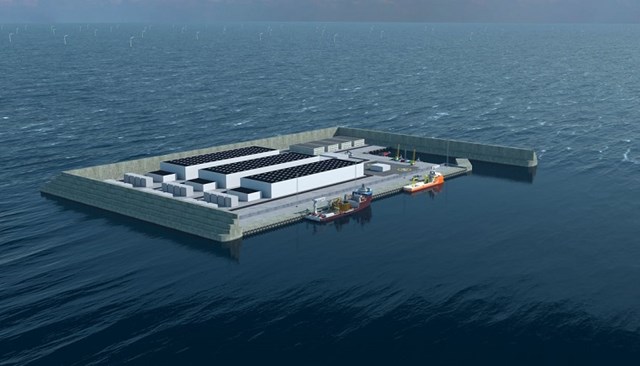 Orsted and its partner ATP have selected three companies to support their offer for a Danish energy island.

Aarsleff, Bouygues and Van Oord “bring extensive design and engineering skills” as well as experience from complex offshore construction projects around the world, according to the partners.

Aarsleff, the Danish specialist for large-scale projects in the areas of infrastructure, adaptation to climate change and energy, will lead the construction work.

The company has installed 600 offshore wind turbine foundations at Horns Rev 2 and London Array Offshore Wind Farm, among others.

Aarsleff was also a key construction partner in the Øresund link, which connects Denmark and Sweden, and has led several port expansion projects in Scandinavia, including the ports of Skagen, Frederikshavn and Stockholm.

Bouygues Travaux Publics, a subsidiary of Bouygues Construction, brings expertise in the planning, construction and operation of large offshore structures such as bridges, tunnels and land reclamations.

Van Oord has built the Palm Jumeirah and many other man-made islands and has decades of experience installing offshore wind turbines, foundations and cables.

The company has worked with Orsted on offshore projects in several countries around the world and is headquartered in Rotterdam, the Netherlands.

“Aarsleff, Bouygues and Van Oord form the strongest team to support our application for the Danish North Sea energy island.

“We are ready to accelerate the green transition in a new and innovative way that will transform the Danish energy system and benefit Danish society, while at the same time providing green solutions for Denmark and our European neighbors.

“We selected these first-class suppliers because of their excellent references in terms of sustainability and innovation, in order to ensure that the energy island is built with respect for the unique environment in the North Sea and with the highest level of technical and commercial competence.”

The North Sea Energy Island is to be put out to tender in 2023, where Orsted and ATP want to submit an offer.

In addition, the Danish energy agency is inviting potential bidders to an orientation discussion as part of the second market dialogue on the award framework for the construction and joint ownership of the energy island in the North Sea.

The orientation meeting will open the second market dialogue on the award framework for the construction and co-ownership of the energy island in the North Sea and give potential bidders the opportunity to get an overview and further details of the decisions from the political agreement.

The orientation talk also informs the participants about the further process at the start of the tendering procedure.

The physical orientation meeting will take place on September 15th in the offices of the Danish Energy Agency in Copenhagen.

An Introduction To Indemnity Regulation – Actual Property and Development