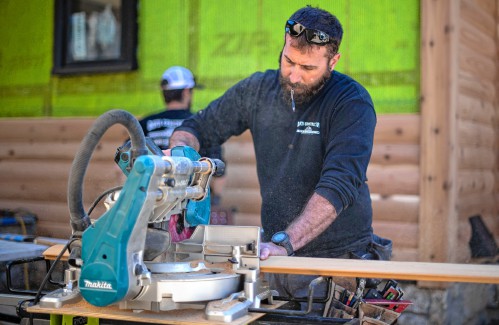 Brad Davis, owner of Davis Construction in Peterborough, NH, said his company was the busiest it has ever been.

With 15 to 20 jobs either already in the works or pending later this year, he is already planning projects for 2022. While many business areas have been severely affected by the COVID-19 pandemic, construction has not slowed. It’s gotten even busier with more people home looking for upgrades.

Despite rising material costs and bottlenecks in the supply chain, construction jobs are progressing. But it’s a different world for the builders and companies that supply the materials on site.

Mike Shea, president and CEO of Belletetes, the construction supplier with nine locations including Pembroke, Jaffrey and Peterborough, NH, said rising material costs had been a problem for some time.

He said that with the constant changes in the market, they could very rarely hold prices for more than a week.

Shea said many products are seeing shortages. Anything made with resin – vinyl windows, PVC sheets, plumbing, and electrical wiring – is hard to come by, let alone keep in stock.

“Making sure everyone has the materials they want when they need them is still a huge challenge,” Shea said, adding that demand is high across the board.

Davis equates the shortage of supplies with the empty toilet roll shelves in stores across the country in March 2020.

“There is a mystery to getting things,” he said. “And it was extremely stressful. You juggle a lot more balls and are not only busier than ever. “

He previously said he could order windows and have them in two weeks. It’s more like five or six weeks now. The siding is now a month and a half waiting.

“That’s because the company-level inventory has been depleted,” he said.

David Boule, owner of Antrim Lumber, said his company has been madly busy since last March, and even more so as the spring project season unfolds. And it was difficult to serve customers on many fronts.

He said sometimes he had to call two or three locations to see if he could find certain materials.

“Last year it was impossible to get pressure treated (lumber). It’s not that bad this year, ”said Boule. But it comes at a premium price that is constantly changing.

“You definitely don’t lengthen quotes for more than a few days,” he said. Some products have more than doubled their cost, and certain suppliers state that they cannot hold a price for more than two days.

One challenge Boule encounters is storage to build up its inventory.

“I tell you if you want to buy it you have to take it,” he said.

“It’s knowing what you can and can’t get,” said Fougere.

Fougere said he was trying to be at least 30 days ahead in the planning process.

Due to the shortage of inventory, prices have risen steadily over the past year and so far there are no signs that this will change anytime soon.

Fougere said he could get a flooring product for $ 32 per sheet in March 2020 – it’s currently $ 67. He’s always on the lookout for prices and supplies when he can.

“I haven’t seen anything in the last year and a half to two years,” said Fougere.

Some plans have been changed and redesigned because certain products are not available, especially windows.

“You get along with what you get,” he said.

Fougere said he already has four new homes in the works for 2021, including two in Jaffrey.

Not only does Fougere have to worry about rising costs, but there is the entire aspect of permit and road weight restrictions to accommodate this time of year.

“You have to schedule everything,” he said.

From what Shea saw, contractors are still getting clearance from customers.

And the bottlenecks and rising prices come at an inopportune time.

“When we get out of winter, especially when the road bans are lifted, we will see a seasonal boom in business,” Shea said. “So it was very difficult.”

Despite rising project costs and shifting schedules due to product availability, Davis says all of his customers are still on the rise. Some projects have been scaled back or adjusted according to the materials available, but “nobody canceled us,” he said.

Davis said he has a couple of new builds in Francestown nearing completion and three more foundations have already been poured. There are also additions on the program as well as kitchen renovations in collaboration with his wife Renee’s, Union Street Kitchens.

Boule said he talks to contractors and builders all the time to get an idea of ​​what to expect.

“They tell me their phones are ringing more than ever,” said Boule.

For the first time, Davis included escalator clauses in his contracts. This is now a necessary part of the process as it has been difficult to predict what materials will cost over the past year when it comes to a job that was planned months earlier.

“It’s not uncommon for the cost to increase by 5-10%,” said Davis. He will cover up to 5% of the increase, but if the cost of materials doubles he has no choice but to pass it on.

“It can put companies like me out of business,” said Davis.

Fougere said when he signs a contract he is tied to that price. Therefore, he carefully examines his proposals and anticipates the materials and manpower.

“Because when you get a raise, it comes out of your pocket,” he said. “You can get caught very easily if you don’t plan.”

Boule said any changes that were added together changed the normal way of doing business.

“You could give someone a price on a summer project in the spring and they would come in and it would be the same,” he said. “That is no longer the case.”

Shea said the pandemic created a number of problems for manufacturers. The increased demand only exacerbated the bottlenecks.

He said that because of the need to produce more materials, the facilities have been operating essentially non-stop and have created some problems with maintenance and downtime.

Davis said there has to be a change inevitably.

“As for the materials, something has to be done with the construction costs,” he said. “It’s not sustainable.”

Right now, he said, forget about finding land because real estate is being depleted, likely due to red-hot home sales last year, resulting in a shortage of inventory.

“It’s like a boom at the worst,” said Davis.

In his opinion, Fougere said interest rates would have to rise again in order for the prices of materials to fall.

“Everyone’s talking about when it’s going to pop,” he said. And really, it’s his customers who bear the brunt.

“The consumer at the end of the day gets the surge,” said Fougere.

Shea called it all a perfect storm. The increased demand, the rising prices and the lack of availability have converged.

Boule said at this point it’s about weather the storm when it comes to cost and availability.

“I don’t see it sinking anytime soon,” he said. “It all depends on the real estate market, but I don’t see any change – at least not this year.”