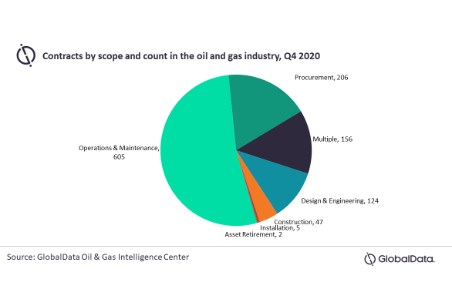 Europe had the majority of contracts with 506 contracts in Q4 20, followed by Asia and North America with 233 and 198 contracts, respectively.

Pritam Kad, Oil and Gas Analyst at GlobalData, said: “With concerns about crude oil prices and the impact of COVID-19 easing, contract activity now looks relatively stable. This shows that the industry is trying to cope with the recent upheaval in commodity markets and making adjustments for long-term sustainability. “

Significant contracts in the fourth quarter of 20 included the $ 3.6 billion EPC contract from Samsung Ingenieria Manzanillo and Asociados Constructores for various units of the Dos Bocas refinery project in Mexico; and Samsung Engineering’s US $ 1.07 billion contract to provide licensor, engineering, procurement, construction and commissioning (LEPCC) services for a methanol production facility in Bintulu, Sarawak, Malaysia.

Kad continued, “These significant contracts will allow Samsung to strengthen its position with technical capabilities and thus be better able to win future EPC projects in the refining and petrochemical markets.” Operations and Maintenance (O&M ) accounted for 53% of total contracts in the fourth quarter of 20. followed by contracts with multiple areas ranging from construction, design and engineering to installation, O&M and procurement – all 14%.

Read the article online at: https://www.worldpipelines.com/contracts-and-tenders/12022021/global-oil-and-gas-contracts-remained-relativ-steady-in-4q20/