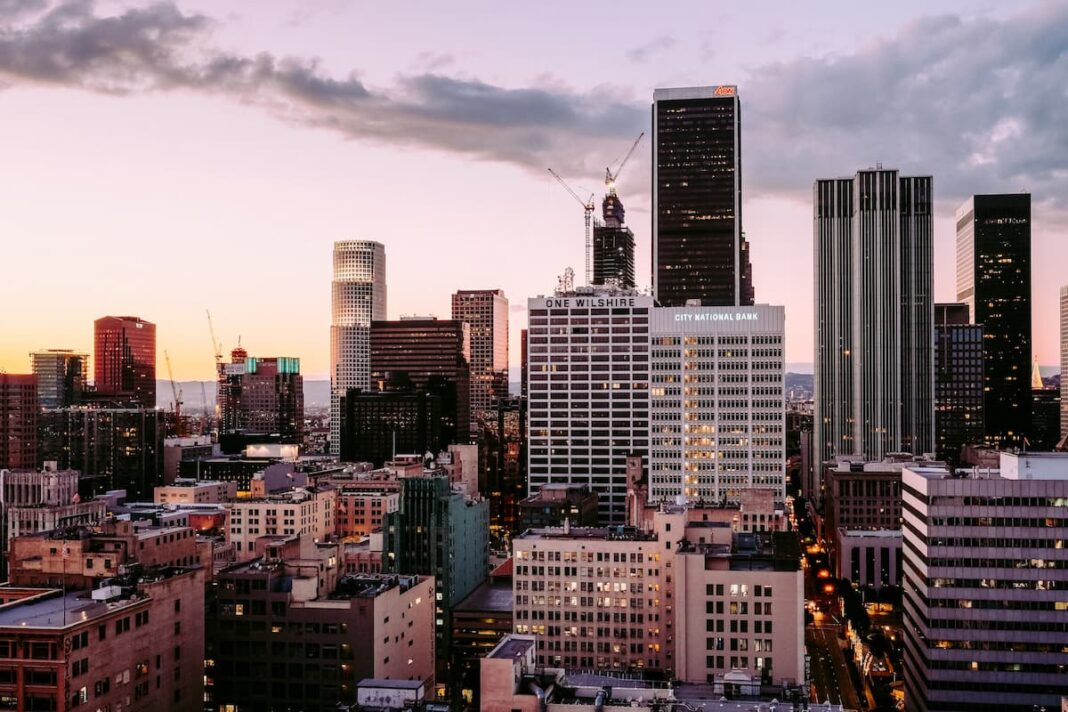 In today’s news, we will look for more information about The Fifth, the first office building in the United States designed by Alberto Campo Baeza, which can now be seen in updated renderings. Meanwhile, Tim Cook and Joe Biden Will Assist TSMC In Revealing A $40 Billion US Chip Buildout. Additionally, the Farm Bureau Building has been purchased by Gallatin County, and renovations are forthcoming. Ashtead and Ferguson, on the other hand, will present an analysis of the current state of the construction and building industries in the United States.

From Downtown Miami, take the MacArthur Causeway to 5th Street in South Beach, where Spanish architect Alberto Campo Baeza will build his first US commercial project. The Fifth Miami Beach will have 60,000 square feet of Class A office space and several amenities. The project was announced in 2021, and exterior imagery was revealed this year. Gabellini Sheppard Associates’ fresh renderings show the project’s magnificent interiors.

The Fifth Miami Beach is one concept for a post-pandemic office. The project shows that tenants value lifestyle over office aesthetics. It has wide indoor/outdoor areas, deep terraces on all four elevations, wellness amenities (sauna, spa, gym, and restaurants), floorplan flexibility, and short walks to surrounding houses, hotels, and hot spots due to its position. (A MiMo property adjacent calls the region a “walker’s paradise.” )

The Fifth Miami Beach will be the first new workplace in South of Fifth in 15 years, yet its finishes, details, and services are designed to create a serene residential atmosphere.

Campo Baeza told AN that making work at Miami Beach was crucial. The building’s exterior shows its elemental expression of slabs covered in glass between its 14-foot floor-to-floor height. “Facades are always a means of communication, like the cover of a newspaper,” the architect said, and these showcase South Florida’s light, air, and views.

Campo Baeza said society sometimes associates innovative architecture with odd things. He calls his work “serene, silent, and maybe classical” since his buildings can last and “welcome the future.”

An inner courtyard illuminates the foyer and office floors. This lets workplaces be layered around the floor. (Campo Baeza related this “classical” concept to his largest office building, a 2001 headquarters for Caja Granada in Spain, constructed around a vast “impluvium of light.)

The roof will contain a bougainvillea garden on a terrace. Campo Baeza said architects sometimes overlook the top, which is the most beautiful. Architects may “underline the beauty of the city” here.

Two buildings on the Fifth Miami Beach campus will be restored as part of the project. The new five-story building exudes Miami beauty, but these Michigan Avenue structures help integrate the construction with the city.

The Miami Beach Historic Preservation Board unanimously approved the project after a “substantial renovation” that salvaged these buildings. The structures will become juice bars. A level is taken from the two-story building to create a double-height room, and the roof of the adjacent one-story will be demolished to create a butterfly garden/outdoor eating space.

The project’s short movie shows a day in the building’s existence, including its ground-floor restaurant.

Cook, Su, and Biden will visit TSMC’s $12 billion Phoenix plant, part of the administration’s push to bring more chip manufacturing to the US and avoid a repetition of the supply interruptions that cost corporations hundreds of billions in sales.

After Apple and other clients urged TSMC to develop more advanced semiconductors in the US, Bloomberg News reported that TSMC increased its plans. Cook told staff that the Arizona factory under development will supply chips.

Bloomberg claimed that TSMC’s increased ambitions and Cook’s appearance were Biden’s victory lap in a state critical to his 2024 reelection bid. In November’s midterm elections, Democrats captured Arizona’s governorship and US Senate seat.

After Apple and other clients urged TSMC to develop more advanced semiconductors in the US, Bloomberg News reported that TSMC increased its plans. Cook told staff that the Arizona factory under development will supply chips.

Bloomberg claimed that TSMC’s increased ambitions and Cook’s appearance were Biden’s victory lap in a state critical to his 2024 reelection bid. In November’s midterm elections, Democrats captured Arizona’s governorship and US Senate seat.

In August, Biden signed the Chips and Science Act, providing $50 billion in incentives for US semiconductor manufacturers. TSMC may be subsidized billions. The president has visited factories around the country to promote US chip manufacture.

National Economic Council Director Brian Deese told reporters Monday that Apple and AMD “will be sourcing major chips from TSMC’s Arizona facility” and that the second TSMC plant will begin construction this year with production in 2026.

Deese noted that US and global corporations are investing and expanding here because of this long-term approach.

When operational, the two factories will generate over 600,000 wafers annually. TSMC produced 4% of its global output in 2021.

Bloomberg News stated that TSMC’s clients have urged the business to launch its latest technologies simultaneously in the US and Taiwan, which would assist the Biden administration meet its objective of producing the world’s most advanced chips in the US. However, Taiwanese and industry executives plan to keep the latest innovation at home.

“We had some other justice building users who were going to need a home,” explains Gallatin County Commissioner Scott MacFarlane.

The county planned to build a $9 million structure half the size of the Farm Bureau headquarters.

The county says tenants’ leases are month-to-month until September, when they intend to start improvements. Renovations will cost $2–4 million.

Being near to the under-construction courts building and the former law and justice center should improve flow.

“You can see the form on the enormous courts building right on the opposite side of the snow pile so it’s any obvious connection,” explains Borzak.

They envision a county services campus as the structures are completed.

MacFarlane believes that fleshing out the campus offers us additional parts to move so we can be creative.

This building will undergo renovations in 2023 and open with the County Courts facility next door in 2024.

Ashtead and Ferguson analyze US construction and building health

Original Source: Ashtead and Ferguson to provide insight into health of US construction and building

As the US construction sector remained robust, Ashtead, a construction equipment hire business, reported greater first-quarter revenues and earnings than projected in September, but rising borrowing costs negated this performance.

Hargreaves Lansdown (LON:HRGV) analysts said: “Medium-term prospects look good, as the US attempts to build out its domestic supply chains there should be an excess of projects that drive up demand for Ashtead’s equipment.

Ashtead has watched the big businesses consolidate and flourish over the past decade. Last quarter, $337m was spent on bolt-on acquisitions, a major expansion strategy. The purchases were lower-margin enterprises, so scale benefits were largely offset by margin decrease.”

Given cost concerns, margins will be monitored.

Ferguson, a plumbing supply company, raised its final dividend 15% and prolonged its share buyback in September despite a fourth-quarter slowdown and expectations of more.

The £24bn firm, which left the FTSE 100 earlier this year to become a principal listing in New York, will report on its first-quarter trading to end-October.

UBS analysts predict organic sales growth of 15% “with volumes somewhat down and pricing still inflationary” with acquisitions pushing total sales to 19%, down from 21.4% in the fourth quarter of the previous financial year, 23.1% in the third quarter, and 29.1% in the first half.

Overall, we discussed the Fifth Miami Beach, designed by Spanish architect Alberto Campo Baeza, as one option for a new workplace in the wake of the pandemic. Tenants’ preference for lifestyle over office aesthetics is demonstrated by this project. Despite being the first new office building south of Fifth Avenue in 15 years, The Fifth Miami Beach aims to make its tenants feel as though they are in a residential building.

Also, the 19th Street Farm Bureau building was purchased by Gallatin County in order to accommodate services that were unable to be accommodated within the new courts complex.

Can litigation be cost-effective? The very best practices for courtroom instances & building insolvencies

Full all underneath building initiatives inside time-frame:DC Jammu to Engineers