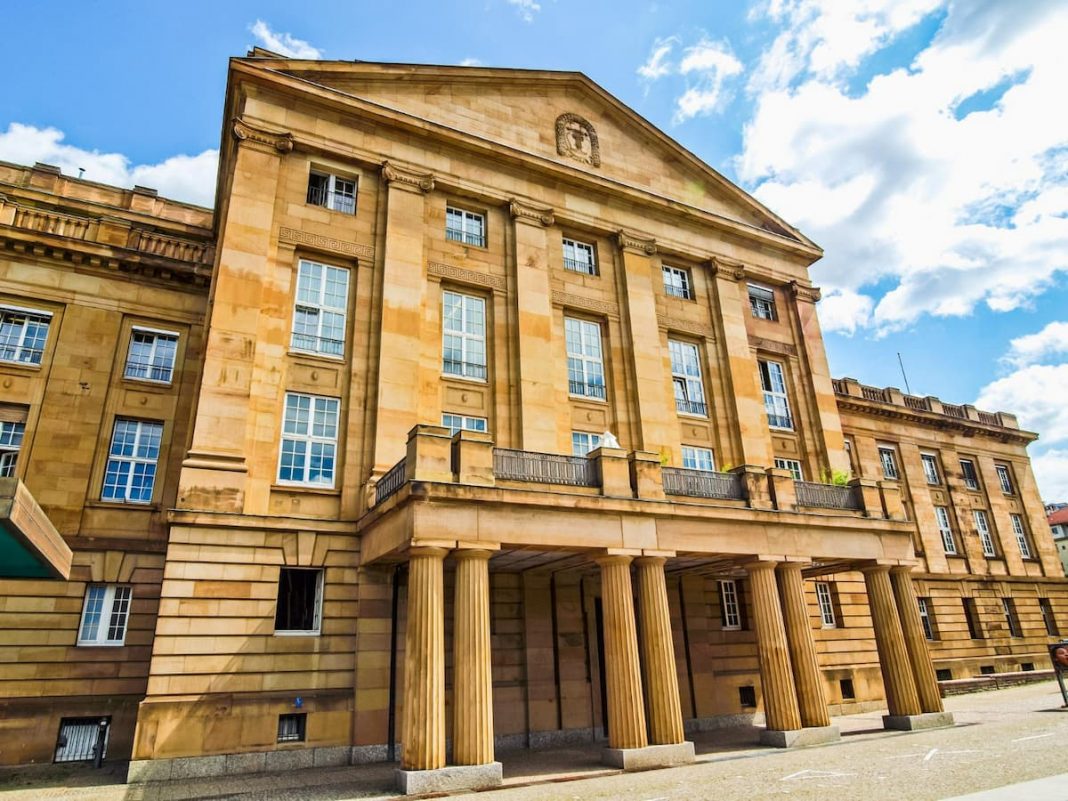 In today’s US construction news, we will look into the historic Brunswick Court Building on Colorado Boulevard which will soon be home to the Lucid Motors Showroom. Dick’s Sporting Goods is building a “House of Sport” at Oakdale Commons. Antioch University is Planning to Construct a Brand New State-of-the-Art Building on the KSC Property. The Volkswagen partner, Gotion High-Tech has planned to build a facility in the state of Michigan.

The three-story masterpiece is being transformed into upmarket office and retail space by Seattle-based Abbott Construction.

Lucid Motors will set up shop on the ground floor.

Abbott Senior Superintendent Mark Freshwater: “These beams haven’t seen the sun since 1887.” Because Southern California has so few historic structures, it’s fun to restore one.

Abbott Construction said the project reflects a rising West Coast trend of renovating older buildings into retail and office areas. Seattle and Los Angeles have seen an uptick in demand for historic renovations.

Brunswick Court will be finished in 2022. Upper-floor leasing continues.

The Doheny Family Trust, which owns the Brunswick Court Building, is pleased to have upmarket tenants like Lucid Motors. Tiffany & Co. and Apple are nearby, making this a great place to shop, work, and eat.

The new firm would provide a broad economic basis and provide a long-term economic benefit to the city and the CD-1-AD-1 zoning district, which favors retail and service enterprises.

According to Michael Vogt, the concept included a two-car dealership and office space.

Customers could debate pricing and order vehicles in the showroom.

After clearing Lucid Motors’ MCUP to construct a sales office in January, the City began negotiations to find a parking and EV charging facility.

In May, Pasadena’s Department of Transportation asked the City Council for permission to lease nine restricted parking spaces in the City-owned Schoolhouse Garage to Lucid Group USA for test-drive automobiles.

The Schoolhouse Garage was chosen due to its proximity to Lucid Motors’ showroom on Colorado Blvd. in Old Pasadena and its spaciousness.

Original Source: Building a Dick’s “House of Sport” at the Future Oakdale Commons

Dick’s Sporting Goods is building its largest store. It will be on Harry L. Drive at the south end of the mall.

In recent weeks, trucks have hauled in tons of soil to fill the east side of the Reynolds Road shopping area.

Antioch would open in spring 2024, pending a definitive agreement and Board of Trustees approval.

Keene State President Melinda Treadwell: “We’ve learned a lot about the power of co-location collaborations.” The transfer improves kids’ academic and social possibilities. The proximity and ease of transition are also excellent for business.

Antioch’s Vice Chancellor for Academic Affairs and University Provost suggested there may be academic synergies with Keene State. This could include accelerated pathways to a bachelor’s from Keene State College and a master’s from Antioch University.

Antioch sold its Keene facility to Monadnock Family Services in June. Antioch will lease back part of the Avon Street facility until a new campus is built.

Keene State College is one of 29 public liberal arts colleges in the U.S. It provides more than 40 undergraduate majors in liberal arts, social sciences, sciences, and professional programs, as well as graduate degrees. U.S. News & World Report ranks Keene Residential College No. 11 out of 54 Regional North higher education schools in the US for 2022-23. Keene.edu

The particular location Gotion has in mind is also revealed by the WEDA application: Gotion Inc., the company’s California affiliate, has applied for a 30-year tax-exempt zone permit. The 523-acre plot spans Mecosta County’s Big Rapids and Green townships.

InsideEVs estimates that Gotion will save $13 million annually in property taxes if permitted. The 30-year subsidy totals $390 million.

Numerous electric vehicle types are made in Michigan, but other states have earned the nod for battery facilities. Ultium Cells, a joint venture between GM and LG Energy Solution, will develop its third battery manufacturing facility in Lansing, Michigan. First, Ohio and Tennessee. Other manufacturers have favored southern U.S. states (Ford and SK On built in Tennessee) or Canada (LGES and Stellantis).

Volkswagen owns 25.6% of LFP cell specialist Gotion High-Tech. The corporation has commissioned or announced the development of multiple battery plants, mostly in China. Göttingen will begin manufacturing in 2023. Gotion wants to produce 300 GWh by 2025.

Gotion inked a supply arrangement with a major U.S. carmaker in 2021. From 2023 to 2028, China will supply 200 GWh of LFP cells. Partners seek to localize LFP battery manufacture and delivery in the U.S. Tesla was considered a viable partner because it uses LFP cells (mainly from CATL) extensively. Tesla already has battery plants in California and Texas, so the manufacturer may be another company.

Overall, we discussed Lucid Motors, the first serious competitor to Tesla’s dominance in the premium electric vehicle market, will soon call the historic Brunswick Court Building on Colorado Boulevard in Boulder, Colorado, its home. In order to construct Dick’s “House of Sport,” construction workers at Oakdale Mall in Johnson City are now putting up steel. Antioch University aims to build a cutting-edge building on Keene State College’s site. Antioch would begin in spring 2024 if a deal is secured and the Board of Trustees approves. Volkswagen partner Gotion High-Tech plans a Michigan factory. Gotion will invest $2.36 billion and generate 2,350 jobs.

Quickly Increasing Development Sector to Speed up the Progress Fee of the Specialty Zeolites...