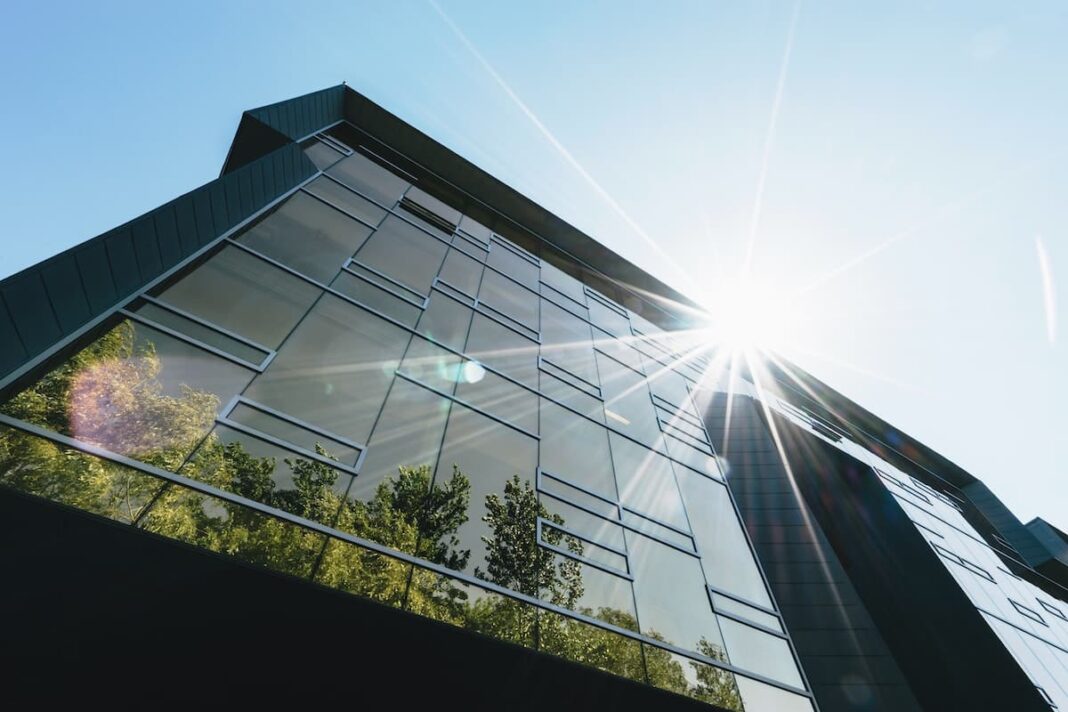 In today’s news, we will look into the Port of Sunnyside that was instrumental in getting the ground broken for the construction of the new HopTown Wood-Fired Pizza location in Sunnyside. Also, Carmon Construction Inc., which has its headquarters in Albertville, was contracted by the City Council to construct the new police station. On the other hand, an initiative with a budget of $300 million that aims to “jumpstart” a revolution in environmentally friendly building practices in the state of Massachusetts. Additionally, construction of the Beauvais Centre in Uganda is aided by Rockford citizens.

Smith reported the Planters Hotel burned down on February 9, 1968, and was demolished. The current structure housed Kentucky Fried Chicken.

Smith said HopTown Pizza will remodel the 2,500-square-foot building for the local food and beverage business and create 20 full-time jobs. Complete by June 11, 2023.

Wright and Roy run the original HopTown Wood-Fired Pizza in Donald, along Interstate 82 near Wapato. For 15 years, it has served locally sourced hand-tossed pizzas and wine, beer, and cider.

Sunnyside will help Wright and Roy cater Yakima Valley events with up to 16 beers on tap. It will have a patio, bar, and restaurant.

Wright said they want to hire 20 to 30 “HopTowners,” some part-time and some full-time, and bring some Donald restaurant personnel to train.

Wright and Roy have been discussing a Sunnyside location with Port of Sunnyside Executive Director Jay Hester for years.

When Varietal Brewing was announced, Jay approached us. We were gonna join them. Wright remarked, “It was bad timing and we were focused on opening in Donald.” We kept in touch with Jay for years but didn’t think we needed a second location.

“Jay told us about 400 S. Sixth in Sunnyside two years ago. Our first location was settling in, so we considered a second. “He offered a deal we couldn’t refuse!” she added.

“It took a while to get to this point where the construction has actually started,” Wright added. “Jay and the Port of Sunnyside staff have been involved since the start and great to work with.”

City officials say Carmon Construction was the lowest of five bidders for the 18,000-square-foot, two-story brick building. The city will spend $6.5 million building it.

The new police station is more than five times larger than the current 3,500-square-foot building.

Officials say the current police department facility was built in 1985 as a municipal hall. The police moved in 2006. New construction is welcome because the facility needs repairs.

Hunt said the new facility will contain a forensic lab and officer wellness center with male and female locker facilities. The evidence room will be huge.

The new facility can shelter 150 people from storms.

Hunt said the patrol division will work in the training center while the detectives and administrative staff work in a double-wide trailer outside city hall.

Councilman Lynn Taylor said the city got a $5 million bond to build the new police department. Reserves will cover the rest.

Taylor remarked, “We’ve been working on this for a year and a half or better.

He said the council saved $700,000 by eliminating a sally port and a multipurpose room for municipal court.

Taylor said the building is built to add those things later.

A broad coalition of environmental, housing, and education advocacy groups say they can help Massachusetts accomplish one of its most difficult climate goals: “decarbonizing” or drastically decreasing carbon emissions from buildings.

Simple concept. The groups want the legislature to allocate $300 million from the state’s remaining federal COVID-19 relief monies to upgrade affordable and public housing, schools, libraries, and other municipal structures. The Massachusetts Clean Energy Center would handle the “Zero Carbon Renovation Fund,” which could be used to replace fossil-fuel-based heating and cooking systems with electric ones, improve building energy efficiency with insulation and new windows, or assist pay for rooftop solar panels.

Logan Malik, interim executive director of the Massachusetts Climate Action Network, a fund proponent, says retrofits are a Commonwealth priority. To reach our legally set targets, the challenge is tremendous.

He says the fund will “jumpstart” the vast shift by “providing the carrot to urge the market towards making the right decisions.” The advantages will go beyond emissions reductions. Retrofitting buildings can reduce indoor air pollution, energy bills, and climate resilience.

Zero-carbon renovation funds aren’t new. During the 2022 legislative session, advocates failed to get the money allocated. In the months since, Malik says they’ve regrouped, extended their alliance, and are recruiting important MPs for another big effort in 2023.

“We are committed to converting our buildings from polluters to guardians of our health, communities, and climate,” he says.

Carbon emissions are usually associated with power plants and vehicles. However, Massachusetts’ 2 million buildings contribute 30% of the state’s emissions, largely from heating and cooking with gas or oil.

Getting to net zero emissions by mid-century involves major economic adjustments. Residential and commercial buildings must reduce emissions 28% below 1990 levels by 2025, 47% by 2030, and 95% by 2050.

A Clean Heat Commission research on building decarbonization estimates that Massachusetts would need to adapt 500,000 houses and 300 million square feet of commercial buildings by 2030.

“This is a tremendous period of opportunity and urgency, and we need to take advantage of it before it’s too late and before we can’t actually accomplish the climate goals,” Malik adds.

Building decarbonization is difficult since no single government initiative can fix it. Millions will have to choose appliances and materials for their homes and offices. It’ll cost a fortune.

Decarbonizing an apartment or single-family home can cost over $30,000, even with state and federal assistance.

Kristina St. Cyr of the Massachusetts Association of Community Development Corporations, an organization of community development groups that build and manage affordable housing, says the Zero Carbon Renovation Fund may not cover the full cost of an upgrade, but it might help.

St. Cyr says, “We know that individuals of color live in affordable housing and have worse health outcomes.” “Decarbonizing these homes helps residents who have been left behind.”

“Our funding mechanisms create disparity in Massachusetts school buildings,” she argues. Climate change will increase those inequalities unless we prioritize the most vulnerable.

Ross says a school upgrading its heating or cooling system could use the cash to help pay for a heat pump instead. Solar panels, which lower heating and cooling costs, might be purchased with the money.

“Our school buildings are not suited for climate change, and students and communities suffer,” Ross adds. “School buildings might be a showpiece building type as the state attempts [its 2030 goal],” she says.

The Zero Carbon Building Fund acknowledges this, but sees it as a downpayment.

He said targeting a range of structures with the money will help designers, contractors, and state authorities scale-up. Meanwhile, “our judgment is that $300 million is capable of creating some meaningful results with significant advantages for individuals across the state.”

Beauvais Centre gets started in Uganda with Rockford locals

Rockford locals raised half a million dollars in June to build a Ugandan retreat center. The building nears completion.

Rockford’s Father David Beauvais and Dick Kunnert led a lecture in Uganda over a decade ago. They met Javis Mugagga, who was encouraged to do more. After two years of fundraising for the Beauvais Centre in Kampala, Uganda’s capital, Javis is happy to see his dream come true.

Our hearts are full. “Grateful for our Rockford supporters,” says Javis.

“This is a vision we’ve been praying for close to seven years so seeing it come to reality. “It gives goosebumps,” says Javis.

40% of Uganda’s population is Catholic. Javis says half a million dollars doesn’t sound like much, but Rockford’s donations will create dozens of employment and economic prospects.

Javis explains, “It’s not just a handout, it’s a hand up.”

Gladys, Javis’ wife, adds, “We are really glad that the people of Rockford have gotten into their pockets, it’s something that they’re doing that is not only helping a few people but many people.”

The structure will take 18 months to finish, but Rockford residents believe it’s a gift they won’t regret.

Father David Beauvais adds, “It’s been a wonderful blessing to the people to see them responding in face so effectively, that it just keeps motivating us and we keep wanting to keep taking them forward.”

Retreat centers and exceptional places are taken for granted. In that region, these are unique. “We’re very grateful for their commitment and what they’ve done,” adds Dick Kunnert.

Javis and his family are grateful for the Rockford community’s support.

Javis believes Rockford is like a second home to him because of its residents’ patriotism.

The Rockford community collected $100,000 more to outfit the building. Dozens of people are working and sleeping at the site to finish the project. The building’s bricks are likewise local.

Donors want to visit Uganda to see their donations’ impact, according to Javis.

Overall, we discussed how the Port of Sunnyside played a role in the groundbreaking for the new HopTown Wood-Fired Pizza location in Sunnyside. According to Adam Smith, the project manager for the Port of Sunnyside, the HopTown Pizza project was made feasible by the economic development agency’s ability to acquire downtown unoccupied property and secure an EPA grant for Brownfields cleaning.

Meanwhile, Moody has chosen the lowest bid for the construction of the new police station. Carmon Construction Inc. of Albertville was selected by the City Council to construct the new police station. The city claims that out of five bids for the two-story, 18,000-square-foot brick building, Carmon Construction submitted the lowest offer and building it will cost the city approximately $6.5 million.

Furthermore, according to Logan Malik, the interim executive director of the Massachusetts Climate Action Network, a fund supporter, retrofits are a top priority for the state and the task of achieving the goals mandated by law is enormous. Providing “the carrot to drive the market towards making the proper judgments,” he claims, the fund will “jumpstart” the massive transformation.

On top of that, a half a million dollars were collected in June by Rockford residents to construct a retreat center in Uganda. The construction of the structure is nearly finished.

Report: Regardless of COVID-19, building prices rose in these US cities

Contemplating a purchase order or lease topic to growth consent? – some well timed...