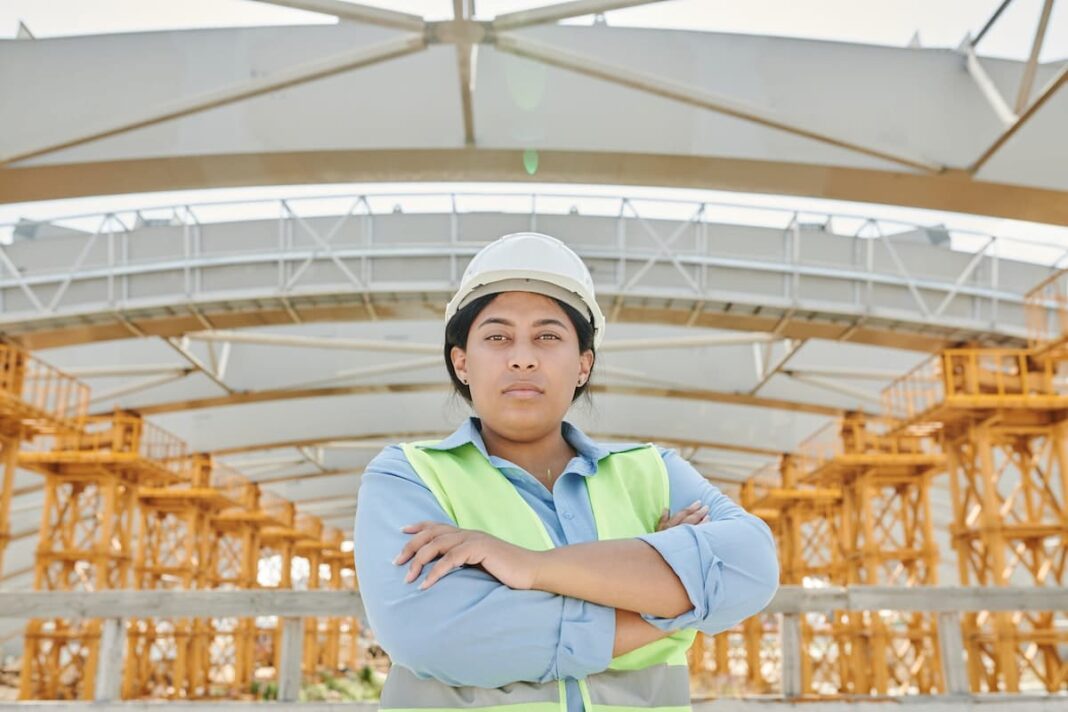 In today’s news, we will look into 2023, the Gordie Howe bridge will appear to be closer to its completed state. Meanwhile, there is currently a push afoot to encourage more women to pursue careers in construction. The International Brotherhood of Electrical Workers is a union that uses names that are gendered. On top of that, after a fatal scaffolding accident in Dilworth, construction workers are understandably shaken.

Over the next year, the long-awaited Gordie Howe International Bridge over the Detroit River will begin to take shape.

According to project organizers, work on the bridge deck over the river will be visible in 2023.

“Work has commenced on the pylon heads of both the Canadian and U.S. bridge towers since the transition sections connecting the tower legs are complete,” said Heather Grondin, vice-president of corporate relations for the Windsor-Detroit Bridge Authority (WDBA), which is managing construction.

The towers will reach their full height (220 meters/722 feet) and road deck building over the Detroit River will commence in a year.

WDBA and Bridging North America—a consortium of global corporations that includes ACS Infrastructure Canada Inc., Fluor Canada Ltd., and Aecon Concessions—are discussing whether the contractual opening date at the end of 2024 will be delayed owing to the COVID-19 epidemic.

Bridging North America has requested a delay in the completion deadline since its financial institution sponsors would penalize them for each day late.

WDBA and the Canadian government, which is funding most of the public-private partnership (P3) project, have resisted changing the enormous contract agreement for fear of setting a precedent that could delay completion.

Grondin stated, “We continue to work toward launching the bridge to traffic by the contracted date of the end of 2024.” WDBA is still studying the pandemic’s impact.

Positively, 7,622 people have been trained to work on the Howe bridge project. 3,369 were Canadian and 4,253 were American, with 42% from Windsor-Essex or Detroit.

Grondin said the project, which includes a six-lane cable-stayed bridge, plazas, and a three-kilometer feeder road linked to Detroit’s I-75 freeway, has reached its peak employment phase, although many more workers are expected before completion.

“As we continue bridge deck and building construction, fresh work possibilities continue,” she said. “Workers are needed when work changes.

“Most of the additional personnel will be laborers and ironworkers, but the project will also need operators and carpenters to fulfill our ongoing peak construction period.”

The project has also used over 230 Windsor and Detroit firms.

All 11 Canadian buildings and canopy structures are undergoing plaza work.

Grondin said some are in early construction with excavation and foundation work, while others have installed roofing, building facade, block walls, and interior rough-ins for mechanical, electrical, and HVAC systems.

The primary inspection lanes have foundations, structural steel, and asphalt.

She added that retaining-wall work has begun where the Canadian plaza will connect to the Herb Gray Parkway and Highway 401.

Grondin said some buildings have foundation and structural work while others have underground utilities, electrical, and plumbing work.

Bridging North America will fund a variety of community enhancements on Sandwich’s west end over the next year as part of the deal to host the $5.7-billion infrastructure project.

Early preparation for a $12-million Sandwich Street restoration will begin in spring 2023.

“The Sandwich Street rebuilding project will encompass just over three kilometers from south of the Rosedale Avenue roundabout past Ojibway Parkway to McKee Avenue,” Grondin added.

The renovation stretch’s streets and walkways will be demolished and rebuilt to accessibility requirements. Cycling infrastructure and a stormwater sewer will be included.

“It will give a beautiful, safe site and a high elevation for residents, students, and tourists to observe construction and eventual bridge view of the Gordie Howe International Bridge,” Grondin added.

She added the Malden Park viewing area will open later in 2023.

Our community benefits strategy serves Detroit and Windsor neighborhoods, and significant work is being done on U.S. and Canadian ports of entry.

“We are pleased to see continued development in 2023 with work on the bridge deck as it crosses the Detroit River,” he said.

“I applaud citizens and businesses on both sides of the border for their patience as we deliver this once-in-a-generation project.”

Original SOurce: A movement is building to get women into construction

The International Brotherhood of Electrical Workers has a gendered name.

95% of Boston IBEW Local 103 retirees are men. Change is happening. A record 16 percent of first-year apprentices have been women, many of them of color, for the past two years.

According to the Bureau of Labor Statistics’ Current Employment Statistics survey, women now make up a record 14% of the construction workforce, up nearly 50% in a decade. The Washington Post discovered that Latina construction employees climbed by 117% over the past six years.

With many women in the pipeline and expanding attempts to encourage women into the trades, Massachusetts’ construction employment is anticipated to keep growing.

The Biden administration recently announced an initiative to get 1 million more women into construction in the next 10 years, nearly doubling the number in an industry with labor shortages and major investments in semiconductor manufacturing and high-speed internet access expected to create 200,000 construction jobs.

Construction also benefits women. It pays well and includes free apprenticeships, and according to the Bureau of Labor Statistics, women make 97% of what men make. Women earn 83 cents for every dollar men earn across all occupations.

Suriyamongkol, 33, helped her father wire their house as a child, but her parents didn’t think girls should do that, so she studied graphic design. Suriyamongkol now believes she found her calling. “I’m living my dream,” she said.

Frank Callahan, president of the Massachusetts Building Trades Council, stated that parents may be resistant to their daughters working in construction. Massachusetts Females in Trades introduces girls to construction through vocational schools and the council. He said parents want their kids to go to college, but those with daughters worry about how they’ll be treated in a male-dominated field. “I don’t want my daughter going into the construction profession where she’ll get harassed,” Callahan added.

The 39-year-old licensed pipefitter stated his coworkers are very supportive. She said they talk about recipes and grocery stores, not “locker room banter,” but she knows tradeswomen who have felt ostracized and belittled by male coworkers. Francis, who pays $61.75 an hour working on heating and cooling systems, founded Boston Union Trade Sisters on Facebook to give women a safe haven and “another sister to lean on” during the pandemic. It has 800 members.

“Construction isn’t just putting on a hard hat,” she remarked.

Shannon Connaughton didn’t contemplate the trades after Mansfield High School. She became a babysitter after dropping out of college to teach. She knew her under-the-table wage without benefits was unsustainable when her friends started settling down and bought houses.

Her union carpenter father wanted her to become a plumber or electrician. Dorchester resident Connaughton, 29, is a second-year electrical trainee. She said finding safety gear for her 5-foot-3 frame was her toughest challenge as a woman on the field. She called most of it “ginormous”.

“I feel like the trades used to be kind of all white males, and now I look around and it’s everybody,” Connaughton said.

Construction is booming in Charlotte, meaning thousands of employees are on site every day.

An ironworker told Genevieve Curtis of Channel 9 that what happened is a reminder of the dangers of the trade.

“It always shakes everyone to the core,” he remarked.

Feculak spent Monday morning trying to determine if any union members were at the E. Morehead Street site when the scaffolding collapsed. He found none were, but a tragedy like this shakes the sector and raises many issues.

“What caused those people to fall, what precautions were taken, and what failed to prevent them from falling?” Feculak asked.

Curtis was there when OSHA investigators came two hours after the accident. They must answer Feculak’s inquiries.

Feculak said the union will monitor this probe. Due to a construction worker shortage and increasing demand, he said they are especially concerned about safety requirements.

“Which worries us, we want to make sure—with all the new buildings we are seeing across Charlotte and North Carolina—that we aren’t cutting corners,” Feculak added.

The Ironworkers also assist families with next steps.

Overall, we have discussed the much-anticipated Gordie Howe International Bridge that will cross the Detroit River and will start to take shape over the course of the following year. In 2023, the organizers of the project anticipate that people will be able to see the progress that has been made on the bridge deck that spans the river.

On the other hand, Policy Group on Tradeswomen’s Issues, a local cooperation in the construction sector, reports that Massachusetts has the largest percentage of female building trades union apprentices in the US at over 10%. About one in five construction students at Massachusetts’ VET institutions are female, the group reports.

Over and above that, the city of Charlotte’s construction industry is flourishing, with thousands of workers always busy. On Monday, three construction workers fell 70 feet from Dilworth scaffolding, resulting in their deaths, according to Charlotte Fire. Sadly, there were two additional victims.

Get caught up on Williamson college development, enchancment plans