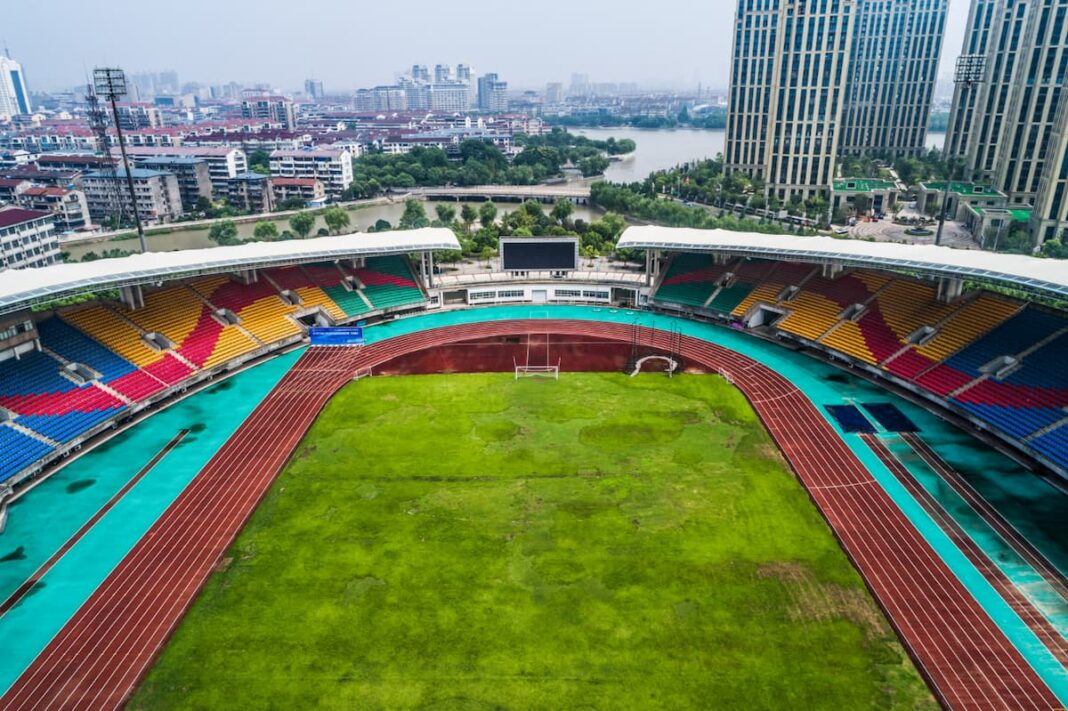 In today’s construction news, we will look into the Kingfish Maine project that has been approved to build and develop a yellowtail fish farm. The 2024–25 Music City GP for IndyCar will be impacted by the construction of the Titans stadium. Newly paved street in St. Augustine’s historic district; named Cathedral Place.

The Kingfish Company has cleared the final municipal hurdle to develop a yellowtail fish farm in Maine.

Jonesport, near where the RAS plant would be built, approved Kingfish Maine’s building proposal.

This municipal building permission is the final step needed for Kingfish to commence pre-construction design and engineering on its new US facility, the company stated.

The municipality of Jonesport is writing its findings of fact, and the Planning Board will issue the building permit in early November.

Kingfish Maine is a wholly-owned subsidiary of The Kingfish Company of the Netherlands and will use the same superior technology and operating strategy.

When fully operational, the new location will produce 8,000 tonnes of yellowtail kingfish annually.

Once the Jonesport facility is operating, Kingfish Maine will be the largest yellowtail producer in the US and will provide local, sustainable seafood for North American retailers and food service providers.

With our Jonesport construction permit approved, we look forward to repeating our EU success in the US by producing high-value yellowtail.

Jonesport has supported our initiative since day one, and our dedication to the town has never faltered. We value our relationship with the town as we develop sustainable land-based technology in the US.

Titans stadium construction will disrupt the Music City GP in 2024-25.

With the Tennessee Titans and Nashville officials seeking final approval for a new $2.1 billion domed stadium on top of IndyCar’s Music City Grand Prix paddock space, race COO Jason Rittenberry is sure organizers will “have a seat at the table” as the area is transformed.

Will 2024 and 2025 be full of logistical questions, headaches, and band aids?

“Yes, they’re considering our event.” Everyone wants it to remain here long-term, and we’ll find a way to make it work, Rittenberry told IndyStar in an exclusive interview Thursday. Our commitment is to run the race every year and get it back downtown as soon as possible if we have to leave. But right now, we’re optimistic we can make downtown work while the Titans lots are under renovation.”

The office of Mayor John Cooper aims to submit draft legislation to the 40-member Metro Council by early November. Should the proposal be authorized, crews would break ground in the fall of 2023, avoiding disruptions, course changes, or paddock footprint changes for next year’s early-August race weekend.

Despite public criticism over the high number of crashes in the first two races, the event COO stated authorities and course designer Tony Cotman have no plans to make big changes.

“I’m not going to criticize drivers or the track, but if IndyCar believed the track was an issue, they’d push us to make modifications,” Rittenberry said.

The Music City GP paddock will be revamped.

2024 and 2025 will see changes. In 2022, IndyCar shared a paddock alongside Trans Am, GT America, Indy Lights, Stadium Super Trucks, and Vintage Indy.

Rittenberry thinks racing weekends may be limited to IndyCar and Indy Lights owing to space. Even with outside construction complete, the Titans and local government may wait until after IndyCar’s 2026 date to demolish the existing stadium to ensure the new one is ready for the NFL season that autumn.

Planners don’t plan to turn paved parking into a stadium, then demolish the current stadium and pave over the rubble. Once the new stadium is built, there will be more green space on the east bank of the Cumberland River, Rittenberry said. “It won’t be a big paved lot,” he said. As much as I wish that were true, I think the value of that land and the revenue it could generate by going vertical will offset allowing it to become a parking lot.”

According to The Tennessean, the new stadium arrangement will compel the city to supply 2,000 parking spots, down from 7,500.

“Once the drawings are done and authorized, we’ll review them and see what our alternatives are (for the paddock), but part of that may be looking at St. Pete, where half the paddock is in a parking garage,” he added. “It’s not ideal, but it’s been done before, so when they finalize designs, we’ll want to make sure we can bring haulers into the first floor if needed.”

Having to look outside the box for its eventual permanent paddock space will be offset by a permanent outdoor stage that may host Music City GP events, he said.

Rittenberry said that because the new stadium will be domed, race promoters can use it for more than suites and a media center. He could imagine it being used like how Lucas Oil Stadium hosts the PRI trade event.

“That might give us choices that people could be excited for in August in Nashville, to put up fan zones and displays in the stadium with air conditioning,” he said.

With the new stadium in the paddock, race organizers can boost hospitality packages. Instead of employing primarily the east-facing suites in Nissan Stadium and allowing guests to stare out floor-to-ceiling windows toward the racetrack, the current track setup will surround the stadium, giving suites on all sides viewing chances.

It should make the next couple years bearable, said Rittenberry. The two races affected by construction want to keep using the Korean Veterans Memorial Bridge, which gives drivers two high-speed stretches and brings part of the race to downtown Nashville.

The plan is to keep the race downtown, but additional sites are feasible if needed. The Music City GP’s Turns 1, 2, 3, 9, 10 and 11 may be open during most construction. Rittenberry said pitlane space is in the building zone, which complicates keeping that track section status quo.

“We are convinced there will be a race and the bridge will be part of it. “It’s just the east bank route,” he added. “But we may utilize the east side road. When it returns, we might add more west side downtown if we lose length on the east side.

“It’s a strategy to keep the race downtown (during construction) and near Broadway. Our event is unique because you can fly in, stay downtown, and walk to it.

If the present footprint doesn’t work for 2024 and 2025, Rittenberry said the Music City Grand Prix will continue. Other choices are Vanderbilt University’s (smaller) stadium or Nashville Superspeedway, where IndyCar raced from 2001-08 and NASCAR debuted in 2021.

“With the Mayor’s office and the city’s promises, we feel certain we’ll be able to maintain this downtown in 2024-25,” Rittenberry said. “But that doesn’t mean we haven’t thought about it.” “If it came down to that as a last resort and the city stated there was nowhere else to run the race, we’d consider it,” he said. Is that on our mind? We wouldn’t do it if we didn’t race for two years.

“This is unpleasant to think about, but it’s a long-term commitment. We’re thinking about a 20-year deal, and we’re confident enough in the city, our event, and IndyCar’s product that this won’t put us back. We hope we can offset those two years with additional advancements and come back larger and better for our fans.”

St. Augustine boasts the nation’s oldest streets. 1570s streets south of the Plaza. In the 1670s-1680s, roadways north of the Plaza were planned out when Castillo de San Marcos construction began.

Old city streets are grid-based. Spain required this pattern. In 1573, King Philip II of Spain signed “Royal Ordinances for the Layout of New Cities, Towns or Villages.” St. Augustine and the rest of Spanish America received the ordinances.

Cathedral Place between St. George and Cordova is a new street in the colonial city. The 1890 road opened. St. Augustine considers a 135-year-old street portion “fresh.”

In 1821, when Florida became a U.S. territory, the U.S. received the Governor’s House. The US administration kept using it. Was the orchard on Cathedral Place in 1821, or had hurricanes destroyed it?

Cathedral Street connected St. George and Cordova. Post Office Park is the area behind the Governor’s House/Post Office. Some have referred to this location as the “West Plaza,” however it was never part of the plaza nor a separate plaza.

St. Augustine had cigar manufacturers. At the turn of the 20th century, there were 42,000 cigar factories in the U.S.

The Jefferson Theater Building stood where the vacant Bank of America is now. A parking lot replaced the ancient cigar manufacturers and small businesses.

Overall, today we discussed Jonesport, which is located close to the proposed site of the RAS plant, and gave its approval to Kingfish Maine’s building project. The Kingfish Company can now proceed with plans to build a yellowtail fish farm in Maine without further municipal approval. Nashville and the Tennessee Titans are trying to get the go light to build a $2.1 billion domed stadium on top of the paddock for the IndyCar race that takes place there every year, the Music City Grand Prix. A brand new street, Cathedral Place, connects St. George and Cordova in the colonial metropolis. It wasn’t until 1890 that construction on the route began. A 135-year-old section of street in St. Augustine is considered “new”.

How Ghana’s Cofundie is crowdfunding the development of inexpensive housing